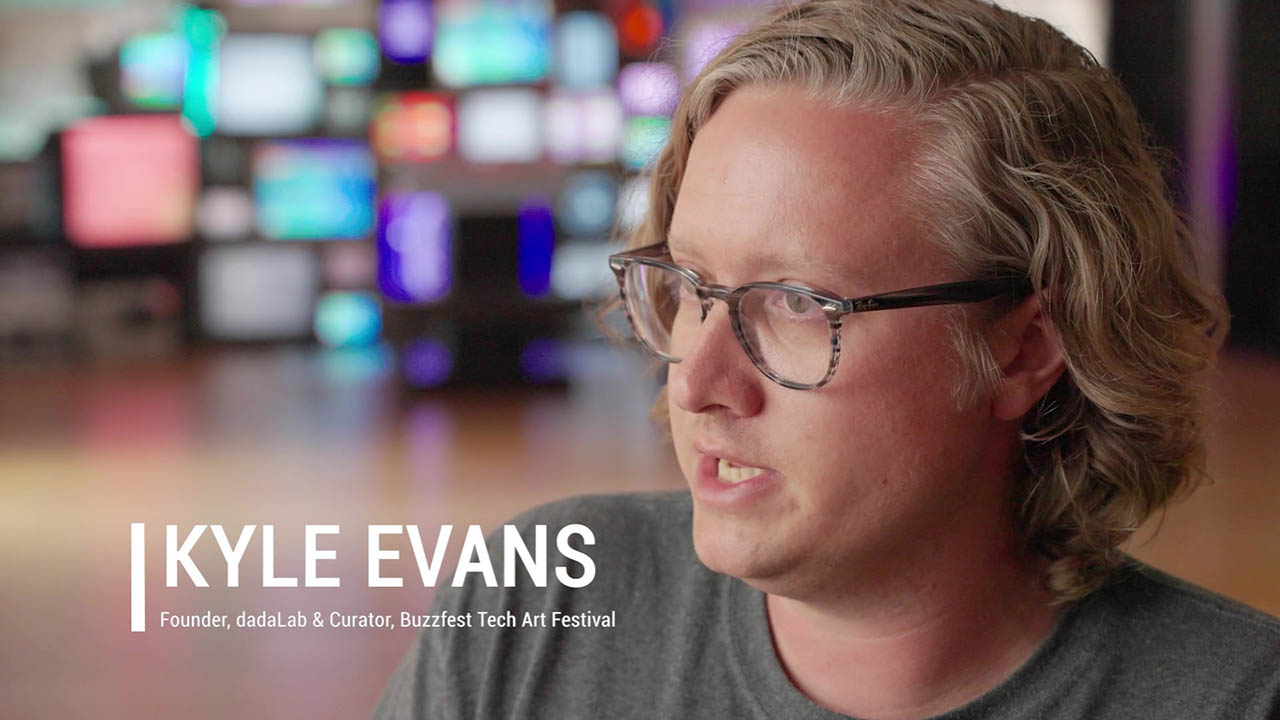 Kyle Evans is a new media artist, sound designer, educator, and performer. Focusing on the intersection of art and technology, his work commonly explores concepts of hacking, technological failure, and media artifacts. He has produced and presented a wide range of tech-art performance and new media installation work throughout North America and Europe at venues such as MUTEK San Francisco, Transmediale in Berlin, the International Computer Music Conference at Columbia University, the Dallas Museum of Art, the Blanton Museum of Art in Austin, the Vancouver New Music Festival, and the Currents New Media Festival in Santa Fe. He is a founding board member and instructor at the nonprofit institution dadaGeek, board member and composer of the art collective Rolling Ryot, and creator of the tech-art event curation organization CounterVolt. in 2019 he co-founded dadaLab with Barna Kantor to produce immersive, experiential art environments. He is currently an active artist and instructor in the Department of Arts and Entertainment Technologies at the University of Texas in Austin, TX.

Barna Kantor was born in Hungary, received a sociology degree in Budapest, and worked in England and France. He is a graduate of Studio Art, Transmedia at UT Austin, the city where he lived for over 25 years. He was artistic director in media education organizations, programmed a micro-cinema, taught at several universities, and worked on a number of public art projects. He is mainly interested in temporary and permanent place-making – defined as “lending meaning to combined physical and virtual spaces.” In 2016 he co-founded dadaGeek, Austin’s School for Expressive Technology with Lisa Woods. In 2018 he co-founded Rolling Ryot to produce and showcase spatial sound works, and in 2019 he co-founded dadaLab with Kyle Evans to create and promote large-scale experiential art environments.

We can't wait for superstar Jaco Booyens' new course either! Simply give us your email and we'll let you know as soon as Reaching the Top is released.

You'll be the first to know when Reaching the Top is released!

We can't wait either! Simply give us your email and we'll let you know as soon as Linda's course is released.

You'll be the first to know when Connections, Life Wisdom from the Herd is released!

We've got a month of celebration planned!  We'll start by taking a ride with a mystery YouTube star as he tours haunted houses around the country. Then we'll check in with master storyteller Cory Doctorow on Disney's haunted mansion. RSVP Now!

Thanks, we'll notify you as episodes and interviews are dropped!

We can't wait for superstar London Kaye's new course either! Simply give us your email and we'll let you know as soon as Artrepreneurship is released.

You'll be the first to know when London's course is released!

Subscribe now and never miss a new idea, a clever tool, or an amazing person who can brighten your day, accelerate your career or change your life.

Subscribe so you’ll automatically receive each new episode. So don’t miss that one spark that may make all the difference.

We can't wait for superstar Kayla Dornfeld new course either! Simply give us your email and we'll let you know as soon as Digital Citizenship is released.

You'll be the first to know when Reaching the Top is released!